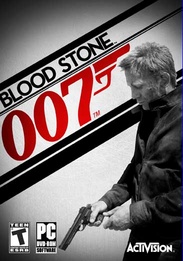 An international conspiracy has placed the UKâs most secretive bio-chemical project into deadly hands, and only Her Majestyâs most lethal agent, James Bond, can unravel the mystery. To navigate through layers of corruption, you, as Bond, will embark on a global chase that will have you battling on land, sea, and air through Athens, Istanbul, Monaco, and Bangkok. Nothing is what it seems as each adventure reveals a deeper and more sinister conspiracy. Engage in precise cover-based gunplay and tactical firefights, and speed your way through explosive adrenaline-fueled driving sequences. Become Bond as he engages in intense hand-to-hand combat and uses his environment to finish off enemies. Take the battle online in a 16-person multiplayer mode that requires skill, teamwork and strategy as you compete in matches that will have spies battling mercenaries. In the fight to prevent the worldâs most dangerous weapon from falling into the wrong hands, youâll need to be the ultimate secret agent.

James Bond Returns: Blood Stone, an explosive third-person action/adventure game from critically acclaimed developer Bizarre Creations. Signature Bond Moments: Your 00 status has you battling through land, sea and air in exotic international locations such as Athens, Istanbul, Bangkok and Monaco. Hunt down your enemies over a wide variety of environments including city streets, rooftops, casinos, oil refineries, dams and even hovercrafts. Brutal Close Quarters Combat: Become Bond using authentic combat maneuvers such as punches, kicks, grabs, throws and the environment to finish off enemies with a fighting style inspired by a blend of martial arts. Cinematic Bond Story: Daniel Craig, Judi Dench and Joss Stone lead you through an original story from the writer of GoldenEye and Tomorrow Never Dies. Trust No One: The UK's biggest secret is about to fall into the wrong hands. Nothing is what it seems as you track an enemy who cannot be seen. High Speed Aggressive Driving: Use offensive driving techniques to speed, reverse and handbrake-turn your way through explosive driving sequences on land and sea. Force enemies off the road, shoot out attacking vehicles, speed under collapsing bridges, slide out of the path of strafing helicopter gunships, do whatever it takes to stay alive and reach your destination.