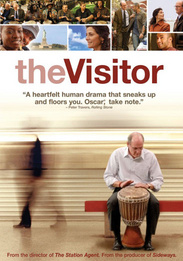 In a world of six billion people, it only takes one to change your life. In actor and filmmaker Tom McCarthy's follow-up to his award winning directorial debut The Station Agent, Richard Jenkins stars as Walter Vale, a disillusioned Connecticut economics professor whose life is transformed by a chance encounter in New York City. Through new found connections with virtual strangers, Walter is awakened to a new world and a new life.