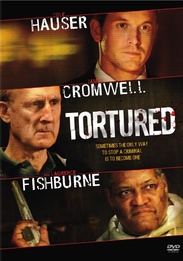 An undercover FBI agent faces a moral dilemma when he's asked to torture a member of one of the world's most powerful crime syndicates. Jimmy Vaughn (Cole Hauser) is hired by a mysterious and unseen crime lord named Ziggy, to torture a confession out of his accountant (Laurence Fishburne). We learn that to gain entry into Ziggy's crime syndicate, Jimmy himself had to undergo a brutal initiation process that is fresh in his mind while he is inflicting his own type of torture on this poor accountant. Jimmy is not who he appears to be as he is actually an undercover FBI agent with ties to the top of the agency. His job is to infiltrate the crime syndicate and learn the true identity of Ziggy, before Ziggy can get inside the FBI and take down the people he has unfinished business with.

Rated R for violence including torture, and language.