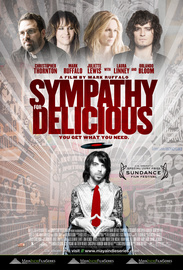 Delicious D, a paraplegic DJ, lives on Skid Row. The night after an unsuccessful visit to a faith healer, Dean wakes up with a strange sensation in his hands and soon realizes he's acquired the ability to heal almost anyone with a single touch. Dean doesn't know what to make of his newfound powers - and is furious that he can't use them to repair his own injured spine - but Father Joe, who runs a local soup kitchen, believes Dean's healing touch is a gift from God. As Father Joe tries to convince Dean to use his power to help the people of Skid Row, Dean tries to convince the members of an up-and-coming rock band to hire him to be their DJ.

Rated R for pervasive language, some drug content and nudity.