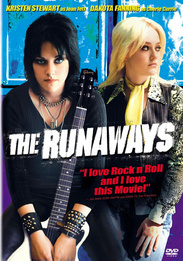 The Runaways were the ground-breaking, all girl, teenage rock band of the 1970s. Friends, Joan Jett and Cherie Currie went from rebellious Southern California kids to rock stars of the now legendary group that paved the way for future generations of girl bands. Under the Svengali-like influence of rock impresario Kim Fowley the group became an outrageous success and a family of misfits. With its tough-chick image and raw talent, the band quickly earned a name for itself-and so did its two leads.

Rated R for language, drug use and sexual content - all involving teens.