The Closer: The Complete Fourth Season 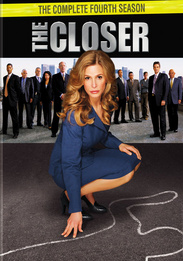 Deputy Chief Brenda Johnson (Kyra Sedgwick) now has more than murderers giving her a hard time. An ambitious newspaper reporter keeps getting in the way as he tries to get a story on the Priority Homicide Division. The result: disaster for the squad. Although Brenda and her team chalk up a string of successes (including catching a child's killer, a drive-by shooter and a murderer who sets Griffith Park ablaze), the reporter's unflattering tell-all marks the end of the PHD. But don't ever count Brenda out. She brings her staff to the newly formed Major Crimes Division for assignments with expanded jurisdiction that extends to con artists, kidnappers, predators and, of course, killers. All of L.A.'s worst are going to meet L.A.'s best.