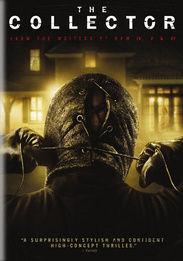 Handyman and ex-con Arkin aims to repay a debt to his ex-wife by robbing his new employer's country home. Unfortunately for Arkin, a far worse enemy has already laid claim to the property - and the family. As the seconds tick down to midnight, Arkin becomes a reluctant hero trapped by a masked "Collector" in a maze of lethal invention - the Spanish Inquisition as imagined by Rube Goldberg - while trying to rescue the very family he came to rob.