Bring It On: Fight to the Finish 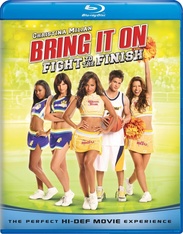 Christina Milian stars as sassy cheer captain Lina Cruz, whose world is turned upside-down when her family moves from the urban streets of East Los Angeles to the sunny beach town of Malibu. At her new school, Lina clashes with Avery, the ultra-competitive all-star cheer captain, while also falling for Avery's super-cute brother, Evan. Lina's always been able to rise to a challenge, but can she create a new all-star squad, beat Avery at the Spirit Championships, and still keep her romance with Evan? Hot music, fierce competition and high-flyin' fun continue in this all-new movie!

Rated PG-13 for some language and innuendo.