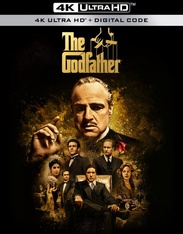 No movie changed Hollywood more than THE GODFATHER. From the bestselling novel by Mario Puzo to box-office blockbuster, its influential legacy endures to this day. Starring Marlon Brando in his Oscar®-winning performance as the patriarch of the Corleone family, this first installment in the three-movie saga paints a dramatic portrait of the Sicilian clans rise and near fall from power in America. Balanced between the Corleones commitment to family and the ugly crime business in which they are engaged, it features career-making performances by Al Pacino, James Caan, Talia Shire, Diane Keaton and Robert Duvall. This searing and brilliant masterpiece garnered ten Academy Award® nominations, and won three, including Best Picture.