A Night At The Roxbury 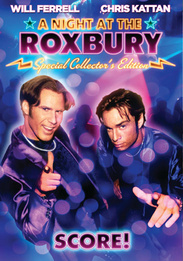 Will Ferrell and Chris Kattan bring their head-bobbing, club-hopping Butabi brothers to the big screen in this fall-down-funny comedy. It seems like Steve (Ferrell) and Doug Butabi (Kattan) will never be cool enough to make the Roxbury club's guest list. That is, until they have a fender bender with their role model, club regular Richard Grieco (21 Jump Street). Eager to avoid litigation, Grieco befriends the starstruck pair and escorts them into a glittery world they once only dreamed about. Score! No longer will the hapless Butabis be A-club people leading B-club lives...maybe. Featuring Loni Anderson, Dan Hedaya, Molly Shannon and dance-'til-you-drop soundtrack, A Night At The Roxbury is infectiously funny entertainment.