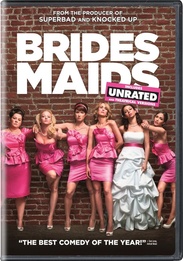 Gut-bustingly funny. Bridesmaids gets an A!!! (Owen Gleiberman, Entertainment Weekly) From the producer of Superbad, Knocked Up and The 40-Year-Old Virgin comes the breakout comedy critics are calling brazenly hysterical! (Alynda Wheat, People) Thirty-something Annie (Kristen Wiig) has hit a rough patch but finds her life turned completely upside down when she takes on the Maid of Honor role in her best friend Lillians (Maya Rudolph) wedding. In way over her head but determined to succeed, Annie leads a hilarious hodgepodge of bridesmaids (Rose Byrne, Melissa McCarthy, Wendi McLendon-Covey and Ellie Kemper) on a wild ride down the road to the big event.

Rated R for some strong sexuality, and language throughout.