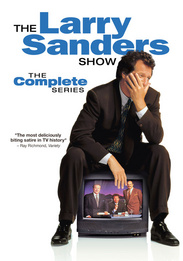 Live on tape, from Hollywood, it's The Larry Sanders Show... the greatest TV show about a TV show ever! This series raised the bar with it's brutally smart comedy and innovative use of both video and film to distinguish on-air events from the "real world" backstage.

Garry Shandling stars as Larry Sanders, a neurotic late-night talk show host flanked by his foul-mouthed producer Artie (Rip Torn), and his bumbling sidekick Hank (Jeffrey Tambor), who are all train wrecks and ego off-air, but late-night's finest when the lights are on. With an amazing supporting cast and packed with celebrity guest stars, the series was written and produced by Shandling, Peter Tolan (Rescue Me) and Judd Apatow (Knocked Up), where every episode is full of hilarious laughs, so start watching now, and "No Flipping."