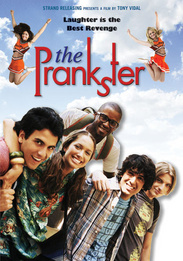 Chris Karas is the brilliant leader of The Pranksters, a secret society that rights the wrongs of high school by pulling sophisticated pranks on deserving oppressors. But with graduation looming, Chris longs for more from life. Guided by the homespun wisdom of his charmingly eccentric Uncle Nick, Chris embarks on a challenging path of self-discovery and romance. Hilarious, heartfelt, and magical, The Prankster is an exciting new high school comedy, destined to be the next teen classic.