A Patch of Blue 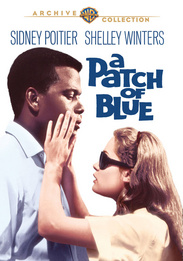 Academy Award winners Sidney Poitier and Shelley Winters--who delivers an Oscar-winning performance--star with Elizabeth Hartman in this tender story of an abused blind girl who only dreams of finding A Patch of Blue.Blind Selina D'Arcy (Hartman) lives a life of servitude with her mother, Rose-Ann D'Arcy (Winters), who's a prostitute and grandfather who's an alcoholic until the day she goes to the park to string beads for extra cash. There she meets the first kind person she has ever known, Gordon Ralfe (Poitier). The two quickly develop a deep bond, but Rose-Ann--who can see only bad in any man--tries to separate her daughter from the African American Gordon, believing that a life of prostitution would be better for Selina than happiness with a Black man.