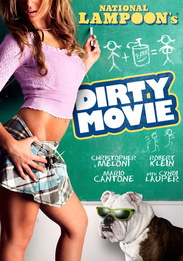 An outrageous cut-rate producer, Charlie LaRue (Christopher Meloni), is about to fulfill his lifelong dream to make a movie about the most offensive, dirtiest jokes ever told. As Charlie and his filmmaking team hilariously struggle to write a script and assemble their award-winning cast, the movie-within-a-movie emerges with one dirty joke after another. Only one can take the crown for writing the dirtiest joke ever told, and Charlie will do whatever he can to be that king.