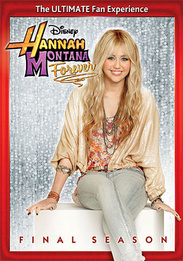 It's the final season of HANNAH MONTANA, the show that redefined television and inspired a generation of young girls. You've been part of Miley Stewart's life for four amazing years and have watched her grow up with her best friends Lilly and Oliver. Now it's senior year, and Miley is at a crossroads. After all these years, does she still have the best of both worlds? Can she continue her alter ego, Hannah Montana, or will she leave it all behind to be an ordinary girl? See the epic series finale and bring home this must-own 2-Disc DVD collection, including cast goodbyes and the exclusive final season alternate ending! Now join Miley, Lilly, Oliver, Robby Ray, Jackson, Rico and special guest stars Sheryl Crow, Cody Linley, Dolly Parton and more as they bring this groundbreaking and beloved series to a close.