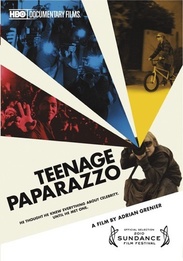 Shot by actor/filmmaker Adrian Grenier (Vince in HBO's Entourage), this 95-minute feature documentary is an exploration of the tenuous relationship between celebrities and the people who make a living selling their images. After a chance encounter with a 13-year-old paparazzo, Austin Visschedyk, Grenier takes a step back to think about the celebrity- obsessed culture that has produced the boy. Adrian starts hanging out with the young photographer, learning the tricks of the trade, as well as what made the precocious teen want to spend his free time running around looking for celebrities and trying to get that "perfect shot."