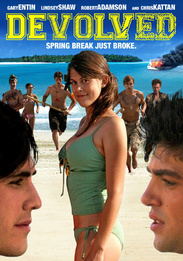 A raucous teen comedy produced in association with Severin Films, Devolved stars Gary Entin (the upcoming Seconds Apart), Lindsey Shaw (10 Things I Hate About You), and Robert Adamson (Lincoln Heights) as leaders of opposing factions of teenagers who find themselves shipwrecked on an uncharted island off the Mexican coast. Faced with the prospect of a long-term stay, the island soon degenerates into a struggle between two groups; teens who want high school to end as fast as possible, and teens who never want high school to end. Also starring Chris Kattan (Saturday Night Live), Devolved will no doubt serve as a cautionary tale to future generations of filmgoers on the dangers of peaking at 18.