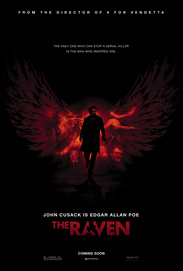 A brutal killing spree terrorizes 19th-century Baltimore and a young detective turns to a notorious author for help getting inside the mind of a serial killer in the stylish, gothic thriller, The Raven, an audacious reimagining of the lurid tales of Edgar Allan Poe. Starring John Cusack as the infamous inventor of the detective fiction genre and Luke Evans as an ambitious sleuth determined to stop more of Poe's gruesome stories from coming to chilling life-and death-The Raven weaves history and fiction into an original and twisted mystery worthy of the master of the macabre himself.

When a mother and daughter are found viciously murdered in 19th-century Baltimore, Detective Emmett Fields (Evans) makes a startling discovery: the crime resembles a fictional murder described in gory detail in the local newspaper-part of a collection of stories penned by struggling writer and social outcast Edgar Allan Poe (Cusack). But even as Poe is questioned by police, another grisly killing occurs, also inspired by a popular Poe story.

A deadly game of cat and mouse ensues as the pair races to stop a madman from turning every one of the author's shocking stories into blood-curdling reality. When Poe's love, Emily (Alice Eve), becomes the killer's next target, the stakes are raised even higher and he must call on his own powers of deduction to try to solve the case before it's too late.