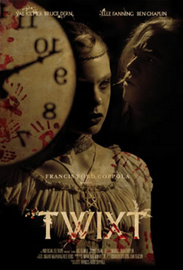 Val Kilmer and Elle Fanning star in this terrifying horror film written and directed by Academy Award® Winner Francis Ford Coppola. Kilmer plays Hall Baltimore, a writer on a book tour who uncovers a disturbing murder that could be source material for his next novel. But as Hall investigates the killing, he finds himself confronted by chilling nightmares, including the ghost of a young girl (Fanning). As he uncovers more horrifying revelations, Hall will discover that the story has more to do with his own life than he could ever have imagined.

Rated R for some bloody violence.