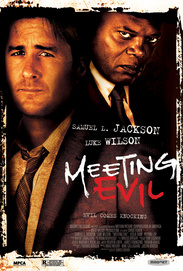 Samuel L. Jackson and Luke Wilson star in MEETING EVIL, an intense psychological thriller that will bring you face to face with pure terror. Jackson is Richie, a mysterious stranger who shows up at Johnâs (Wilson) door asking for help with his car. All too soon, the mild-mannered John discovers he has become an unwilling passenger, trapped in a murderous ride through town and deep into the countryside. When Richie decides to pay a visit to Johnâs wife (Leslie Bibb) and kids, John has no choice but to confront this sadistic and unpredictable killer - But saving his family will ultimately come at a terrible price.