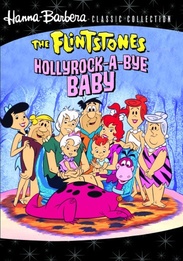 The Rubbles and the Flintstones head out west to glamorous Hollyrock to visit Pebbles and Bamm-Bamm after discovering they are going to be grandparents. But Pebbles is busy with her advertising career, while Bamm-Bamm is trying desperately to sell his screenplay and neither is prepared to deal with an over-extended parental visit. As Wilma and Betty try to take charge of baby prep, Fred and Barney set out to peddle Bamm-Bamm's screenplay, against his express wishes. Hollyrock players (including one voiced by Raquel Welch!), crime bosses and bowling bags add to the confusion before the next generation arrives on the scene.