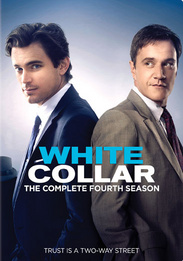 Matt Bomer excels again as charming con man Neal Caffrey in another engaging season of crime solving and high-stakes heists! Facing the uncertain future of his partnership with FBI Agent Peter Burke (Tim DeKay), Neal sheds his tracking anklet and disappears into thin air. But the Feds arenât done with him and Neal is hardly ready for retirement. Back in action, Neal ponders the future as Season Four delves deeper into the stunning secrets of his mysterious past. Packed with seduction, intrigue, and more of everything you love about TVâs sexiest show, White Collar will have you glued to the edge of your seat. Let the games begin!