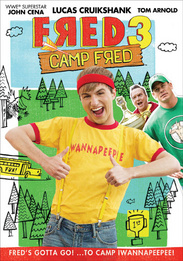 Schools out and Fred Figglehorn's (LUCAS CRUIKSHANK) dreams of waterslides, Clydesdales and waffle bars turn to nightmares of gruel, poisonous berries and Crocobearimoose when his mom signs him up to the wrong camp! Stuck at Camp Iwannapeepee, Fred is convinced his cabin mates are being poisoned and fed to camp director Floyd (Tom Arnold) -- who's really a Rat Monster in disguise! GHAAAA!!! Not even Fred's uber-cool Dad (WWE® superstar John Cena) can help him escape! Luckily, Fred makes new friends, and together they battle Kevin's Camp Superior in the 70th Annual Summer Camp Games. Will a rousing speech and an epic musical number be enough to win the competition?