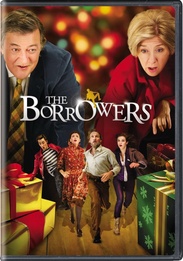 Arrietty Clock (Aisling Loftus) is a headstrong teenage Borrower whose parents, Pod (Christopher Eccleston) and Homily (Sharon Horgan), are terrified of the "Human Beans" who live above them. Desperate for freedom and adventure, Arrietty sneaks out one night and befriends a lonely boy who lives upstairs. But Arrietty's adventure inadvertently reveals her family's existence to the scheming scientist Professor Mildeye (Stephen Fry), forcing them to go on the run into the big bad world.

Enlisting the help of Spiller (Robert Sheehan), a leather-jacketed Tearaway with a roguish glint in his eye, Arrietty embarks on a daring mission to outsmart Mildeye.