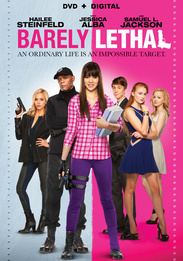 Weary of her life as a teenage Special Ops Agent, Megan' (Hailee Steinfeld) fakes her own death and enrolls in a suburban high school. Hoping to live the life of a "normal" teenager, she discovers that being popular, dating, and fitting in isn't as easy as she thought. Complicating matters is Victoria' (Jessica Alba), her former handler and current nemesis, who enlists rival teen Special Agent Heather' (Sophie Turner) to go undercover at her high school and capture her.