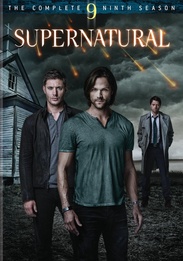 With the angelic Host's descent to Earth. Sam and Dean now face a world inhabited by thousands of powerful beings which soon form their own chaotic agendas. Before tackling the threat of the "loose nukes" roaming the globe, the Winchesters engage in their most personal conflict yet. Meanwhile, Castiel finds he's more vulnerable  and yet capable of more humanity  than ever. As the threat escalates, a way must be found to reopen the gates of Heaven and head off a demon insurrection in Hell. Throughout, darkness leaves its mark on Dean: has he finally crossed the line to protect his family? The excitement of this 23-Episode Season 9 product offering is positively cataclysmic!