Hector and the Search for Happiness 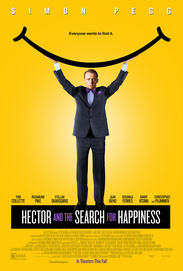 Hector is an eccentric yet irresistible London psychiatrist in crisis: he feels like his life is going nowhere and his patients are just not getting happier. One day, armed with boundless courage and a child-like curiosity, Hector breaks out of his sheltered and comfortable life to go on a global quest to discover the meaning of happiness. Leaving his loving and very understanding girlfriend behind, Hector embarks on a thrilling, dangerous and hysterical journey as he tries to answer the ultimate question. Does true happiness actually exist?

Rated R for language and some brief nudity.