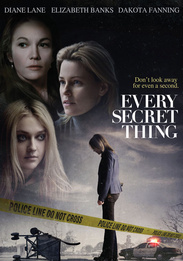 From a producer of FOXCATCHER and based on the novel by New York Times best-selling author Laura Lippman, EVERY SECRET THING is a gripping psychological thriller about the chilling consequences of the secrets we keep. Detective Nancy Porter (Elizabeth Banks) is still haunted by her failure to save the life of a missing child from the hands of two young girls. Eight years later, another child goes missing in the same town just days after Ronnie and Alice (Dakota Fanning and newcomer Danielle Macdonald), the two girls convicted of the former crime, were released from juvenile detention. Porter and her partner (Nate Parker) must race against the clock to prevent history from repeating itself. But as they begin to investigate the girls and their families, especially Alice's protective mother (Diane Lane), they unearth a web of secrets and deceptions that calls everything into question.

Rated R for some language and disturbing images.