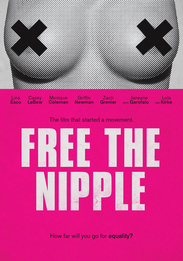 A group of fearless women fight for their right to go topless in public, as they smash societal taboos one bare breast at a time. Based on a true story, this spirited satire follows New York City activists Liv and With, who take their crusade for gender equality from the streets of the urban jungle to the courts. More than just a movie,Free the Nipple has launched an empowering real-life movement, inspiring women across the globe to take back their bodies.