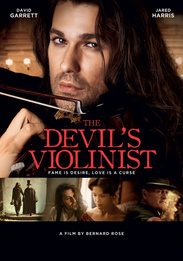 Superstar violinist David Garrett makes his acting debut as the legendary and notorious Italian violinist and composer NiccolÃ² Paganini whose talent was so great he was called âThe Devilâs Violinist.â Paganini is at the height of his career and under the strong control of his manager Urbani (Jared Harris), who will risk anything and anyone to bring Paganini to England. Urbaniâs plan, helped along by a British couple and a newspaper writer Ethel Langham (Joely Richardson) is brought to fruition as Paganini conquers the crowds of London and the hearts of women. When he falls in love with a young singer, Urbani must find a way to separate them and keep his hold on the larger than life superstar. This turbulent tale of love, lust, power, and the lure of fame is set against a glorious score by David Garret and composer Franck van der Heijden.

Rated R for some strong sexuality/nudity, and for drug use.