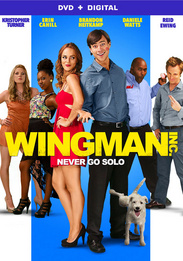 After an unexpected breakup, Bobby's friends convince him to get out of his rut by leveraging his prowess with the ladies into a business as a wingman for hire. Meanwhile, Kristy - who also just went through a breakup - finds therapy and monetary success in defending women from sleazy male advances. When Kristy and Bobby take a sudden interest in each other, it's only a matter of time before one of them finds out that they're working for the competition.

Rated R for crude sexual content, drug use and language.