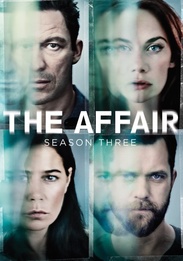 Season 3 of THE AFFAIR picks up three years after Noah's shocking admission of guilt at the murder trial of Scott Lockhart. Noah attempts to restart his life, but the damage wrought by his past decisions has made him a ghost of his former self. Alison has been raising daughter Joanie alongside Cole and Luisa in Montauk, but Alison's past continues to rear its ugly head as Cole and Luisa attempt to build their own future. For Helen, life appears to continue on, but just below the surface of a successful business and a bustling home lies uncertainty with her boyfriend Vik, instability amongst her children, and an unshakeable feeling of guilt.