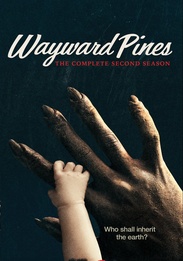 From executive producer M. Night Shyamalan and based on the world created by author Blake Crouch in his international best-selling series of books, the 10-episode, second season will pick up after the shocking events of Season One, with the residents of Wayward Pines battling against the iron-fisted rule of the First Generation. As events unfold in Wayward Pines, the thoughtful and philosophical Mitchum -- a former teacher -- makes a decision that will affect the fate of Wayward Pines and every resident living there.