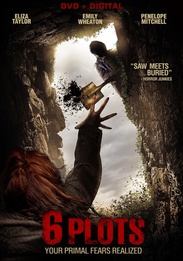 After passing out at a party, Brie wakes up to a strange phone message: a lunatic has abducted her six friends and buried them in boxes around the city. Each box has its own deadly terror - water, gasoline, insects - waiting to kill its occupant. To add to the sadistic thrills, the killer is streaming footage of the trapped kids on the Internet - and to each other. Forbidden to call parents or police, Brie must use her wits to locate her friends' six death traps before their time runs out.

Rated R for language, some violence/terror and teen partying/drug material.