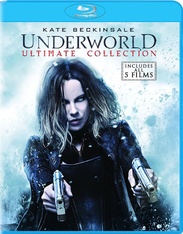 Experience all five films in the iconic Underworld series on Blu-Ray in the ultimate Underworld collection!

Underworld
Underworld reimagines Vampires as a secretive clan of modern, aristocratic sophisticates whose mortal enemies are the Lycans (werewolves), a shrewd gang of street thugs who prowl the city's underbelly. The balance of power is upset when a beautiful young Vampire and a nascent Lycan -- deadly rivals for centuries -- fall in love. Len Wiseman directs Kate Beckinsdale and Scott Speedman in a fast-paced, modern-day tale of deadly action, ruthless intrigue and forbidden love, all set against the backdrop of an ancient feud between the two tribes in a timeless, Gothic metropolis.

Underworld: Evolution
Kate Beckinsale is back as vampire heroine Selene in the highly anticipated sequel to Underworld. Underworld Evolution continues the saga of war between the aristocratic Death Dealers and the barbaric Lycans (werewolves).

The film traces the beginnings of the ancient feud between the two tribes as Selene (Kate Beckinsale), the vampire heroine, and her love Michael (Scott Speedman), the lycan hybrid, try to unlock the secrets of their bloodlines.

The tale of action, intrigue and forbidden love takes them into the battle to end all wars as the immortals must finally face their retribution.

Underworld: Rise of the Lycans
Explores the origins of the centuries-old blood feud between the aristocratic vampires known as Death Dealers and their onetime slaves, the Lycans.

Underworld: Awakening
Kate Beckinsale, star of the first two films, returns in her lead role as the vampire warrioress Selene, who escapes imprisonment to find herself in a world where humans have discovered the existence of both Vampire and Lycan clans, and are conducting an all-out war to eradicate both immortal species.

Underworld: Blood Wars
The next installment in the blockbuster franchise follows Vampire death dealer, Selene (Kate Beckinsale) as she fends off brutal attacks from both the Lycan clan and the Vampire faction that betrayed her. With her only allies, David (Theo James) and his father Thomas (Charles Dance), she must stop the eternal war between Lycans and Vampires, even if it means she has to make the ultimate sacrifice.