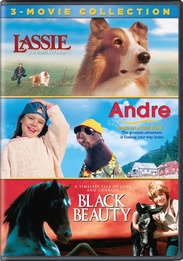 LASSIE: The story of an intelligent, heroic collie and his young owner, previously featured in numerous films and a successful 1950s television series, was updated for the 1990s in this family feature. This time, Lassie is determined to help a cynical city boy named Matt (Thomas Guiry), who turns even more resentful when his family relocates to a small town in rural Virginia. Soon after this move, a bright collie enters the family's life and winds up with the name Lassie because of the television show, which Matt's younger sister (Brittany Boyd) watches passionately. Lassie sets out to cheer Matt up and introduce him to the wonders of nature, while also helping the family stand its ground against rich, unpleasant neighbors. There are also run-ins with vicious wild animals and a daring rescue over river rapids, but the main focus remains on the emotional relationship between Matt and the dog, a story that will seem old-fashioned and charming to some viewers while familiar and sentimental to others. ANDRE: This family drama features the riotous exploits of a lovable seal who befriends a family of animal lovers living in Rockport Maine. The father in this family is Harry Whitney, the harbor master with a great love of animals. His wife Thalice, teenagers Steve and Paula also adore wild critters. But the one who loves them most of all is Toni, a grade-schooler. Every corner of their seaside home is filled with small animals. At work Harry battles the fishermen who hate the seals because they interfere with their catch. Their leader is Billy Baker who drinks too much. At school Toni is persecuted by her schoolmates, the sons and daughters of fishermen. Andre, the seal, has been separated from his clan and is sick. He is rescued by Harry, who brings him home. With Toni's special help, Andre returns to health and becomes a real handful by getting into innocent trouble at every turn. BLACK BEAUTY: Based on the all-time favorite novel by Anna Sewell, Black Beauty is a lyrical tale of the friendship and understanding between a young boy and his colt. Joe Evans (Mark Lester) and Black Beauty are parted and before their reunion, Beauty passes from owner to owner as a race horse, circus performer, military steed in India, and a worker for a coal merchant. Black Beauty is a passionate argument for the humane treatment of animals, as well as outstanding family entertainment.