The Middle: The Complete Eighth Season 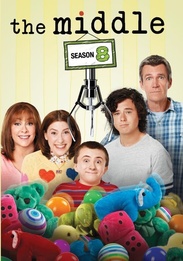 In The Middle's hit eighth season, the Heck kids continue to smash through their comfort zones and navigate new situations -- which may or may not be comforting to parents Frankie (Patricia Heaton) and Mike (Neil Flynn). Axl (Charlie McDermott) may be living out of a Winnebago, but he has discovered the love of his life. Meanwhile, always-optimistic Sue (Eden Sher) has caught the acting bug in Dollywood and is changing her major to drama. Now in high school, Brick (Atticus Shaffer) has made it his mission to fit in with his peers -- and not be one of the weird kids. With an emptier nest, Frankie and Mike cut back on the parental duties -- which is easier said than done, as parenting continues no matter where your kids are. Balancing kids and work never really gets easier. It just gets different!