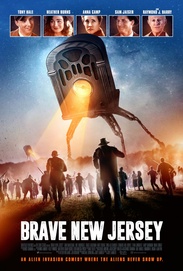 In a small New Jersey town on the night of Orson Welles's legendary 1938 "War of the Worlds" radio broadcast, the hoax that terrified millions into believing Martians were invading America, citizens face what they think is their last night on Earth. The over-worked town's mayor Clark (Tony Hale, "Veep") will take a chance on love. The neglected housewife, Lorraine (Heather Burns, "Manchester By The Sea") will break free from her big-cheese husband (Sam Jaeger, "Parenthood"). The demure schoolteacher Peg (Anna Camp, "Pitch Perfect") will become a warrior. The aimless reverend (Dan Bakkedahl, "Life in Pieces") will rediscover his faith. The scared Sheriff (Mel Rodriguez, "The Last Man on Earth") will find his courage. And the reclusive war veteran (Raymond J. Barry, "Training Day") will become a hero as he convinces the town to fight the aliens. All these characters join forces for a final "battle" that leads to a surprising and hilarious outcome.