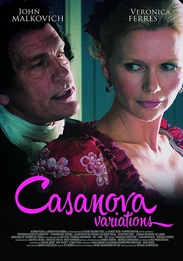 Casanova has accepted the Duke of Waldstein's proposal: he's the librarian of the Castle of Dux, in Bohemia. At the end of his life, he begins to write his memoirs. This is where he receives Elisa von der Recke's visit, who is very interested in his manuscript. Casanova doesn't recognize in the features of this charming woman, a girl he had seduced in the past and who had wanted to die for him. The arrival of Elisa is both stimulating, the opportunity to start a new challenge (to conquer her) and threatening (he questions himself about the motivation of the traveler). Elisa raises in her host both a burst of carefree life and the lucid weariness of a tired body that fears death.