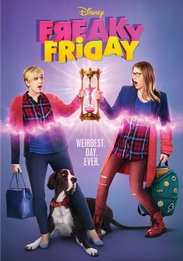 Ellie is a 16-year-old attempting to assert her independence from her mom. Katherine is a mother struggling to understand her stubborn teenage daughter. A confrontation arises when Katherine won't allow Ellie to join "The Hunt," an all-night scavenger quest. Upon wishing the other would change their ways, they magically swap bodies through the power of an hourglass. Now, the two must spend the day in each other's shoes while they hunt down the matching hourglass that in order to swap bodies back to their true selves.