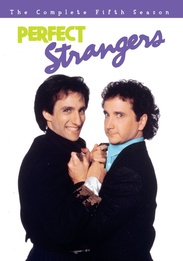 Season five of this fan-favorite comedy finds distant cousins Larry (Mark Linn-Baker) and Balki (Bronson Pinchot) not only somehow managing to survive despite their hilariously inept bumbling but becoming actual heroes! Larry and Balki are still dating their much-more-sensible neighbors, Jennifer (Melanie Wilson) and Mary Anne (Rebeca Arthur), and find themselves playing unlikely saviors when a vacation retreat with their girlfriends in the mountains gets crashed by a dangerous escaped convict. Life at the Chicago Chronicle becomes adventurous when Larry inadvertently enrages a money-laundering mad bomber, while Balki turns the company newsletter into a scandal sheet. On the home front, Larry and his dad have a personal breakthrough while trapped in a flooding basement, and Balki finds his favorite cousin, Bartok (also Bronson Pinchot), has turned into a Los Angeles hipster scam artist -- after living there for six months!