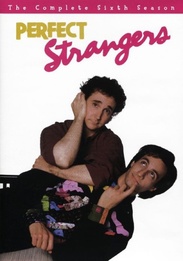 Season six of this beloved hit sitcom finds wedding bells in the air, as Larry (Mark Linn-Baker) proposes to Jennifer (Melanie Wilson). With perfect, distant- cousin Balki (Bronson Pinchot) on hand to make sure the nuptials have the proper Myposian touch, it promises to be a wedding to remember -- provided the boys ever make it to the altar! Before they make it to Larry's wedding, they will share a plane ride with a crazed combat pilot (Kenneth Mars); orchestrate a duel with Balki's ancestral enemy, Zoltan (Nicholas Kadi); accuse Balki's girlfriend, Mary Anne (Rebeca Arthur), of being a black widow serial killer; battle the mob in Los Angeles; become a crusading pair of investigative reporters; and reenact an episode of The Honeymooners, with Larry as Ralph and Balki as Norton (naturally!). It all culminates with Balki subjecting Larry and Jennifer to the traditional Nupitiki Satiki, the infamous Myposian marriage test!