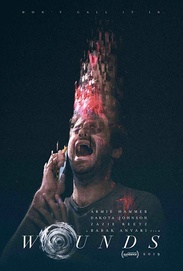 Will is a bartender in New Orleans. He has a great job, great friends, and a girlfriend, Carrie, who loves him. He skates across life's surface, ignoring complications and concentrating on enjoying the moment. One night at the bar, a violent brawl breaks out, which injures one of his regular customers and causes some college kids to leave behind a cell phone in their haste. Will begins receiving disturbing texts and calls from the stranger's phone. While Will hopes to not get involved, Carrie gets lost down a rabbit hole investigating this strange malevolence. They've discovered something unspeakable, and it's crawling slowly into the light.

Rated R for disturbing violent content, language throughout, drug/alcohol use, and brief nudity.