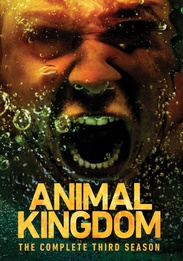 The Codys are back, and the ties that bind them are about to be stretched to the limit in the third season of this bold, adrenaline-fueled hit drama about a Southern California crime family. Ellen Barkin (Sea of Love) stars as Cody clan matriarch Janine "Smurf" Cody, who takes in estranged grandson Joshua "J" Cody (Finn Cole, Peaky Blinders) following his mother's overdose on heroin. In last season's shocking conclusion, second-in-command Baz (Scott Speedman, The Vow) was shot while on his way to Mexico after framing Smurf for murder. His fate is revealed in the Season Three premiere, which opens with Smurf still in jail and her grandson J in charge of the family business. The Cody men find themselves increasingly divided as they fight for both control and their independence, but have to come together when outside threats emerge. Denis Leary (Judgment Night) makes his series debut as Billy, Deran's drifter dad, who comes back to make amends but may have other motives.