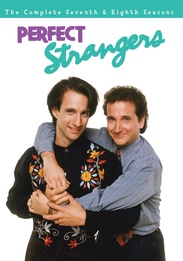 The final two seasons of this fan-favorite sitcom see changes afoot for wide-eyed Myposian immigrant Balki (Bronson Pinchot) and his American cousin, Larry (Mark Linn-Baker), as they continue to offset each other's contrasting personalities. At the Chicago Chronicle, editor-in-chief Mr. Wainwright (F.J. O'Neil) promotes Balki from mailroom clerk to children's page editor, with Larry as his new staff writer. Meanwhile, after Balki passes his examination to become a U.S. citizen, his mama (also played by Bronson Pinchot) convinces him to return to Mypos, and Larry follows in an attempt to bring Balki back, only to fall prey to the Myposian way of life! But the most important events begin with weddings and end with babies being born one on a runaway balloon!