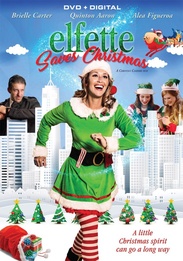 A Little Christmas Spirit Can Go A Long Way

A not-so-ordinary elf named Elfette (Brielle Carter) finds her vacation in Florida cut short when there's suddenly a Christmas emergency-- Santa Claus (Quinton Aaron) has been kidnapped by the New York Mafia's crime boss, Little Georgie (George Vricos)! Elfette to the rescue! Upon arriving in New York, Elfette finds herself lost in a human world she doesn't understand and with a lunatic elf hunter named Ernest Killingsworth III (Zachary Vasquez) in hot pursuit. To save the day and prove herself as an extra special elf, she must team up with her best friend Sparkle (AlÃ©a Figueroa) to save Christmas, Santa, and the elves before Christmas is ruined for the entire world!