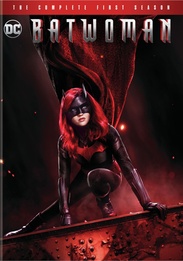 Kate Kane never planned to be Gotham's new vigilante. After Batman disappeared, Gotham was in despair. Until she returned. Armed with a passion for justice and a flair for speaking her mind, she soars through the shadowed streets of Gotham as Batwoman. But don't call her a hero yet. In a city desperate for a savior, she must first overcome her own demons before becoming Gotham's symbol of hope.