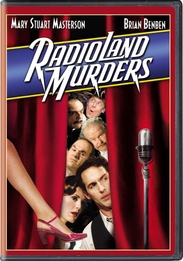 From the mind of George Lucas, Radioland Murders is a star-studded, madcap murder-mystery that brings back the heyday of live radio! The excitement begins as Chicago radio station WBN celebrates its first night on the air, complete with live dramas, comedy acts and orchestral interludes. The real action, however, is behind the scenes. Someone is murdering the company employees one by one, and station secretary Penny (Mary Stuart Masterson) and her estranged husband Roger (Brian Benben) must join forces to find the killer. The loony suspects - and potential victims - include the eccentric sound effects man (Christopher Lloyd), the military-minded station owner (Ned Beatty), the sultry singer (Anita Morris), the slick announcer (Corbin Bernsen), and the toupee-topped director (Jeffrey Tambor). Before the night is over, there will be romance, thrilling chases, narrow escapes, and a spellbinding action-packed climax!