The Lords of Salem / Nothing Left to Fear 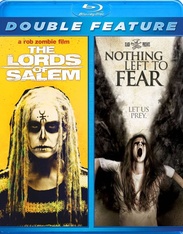 THE LORDS OF SALEM: From the singular mind of horror maestro Rob Zombie (HOUSE OF 1000 CORPSES) comes a chilling plunge into a nightmare world where evil runs in the blood. THE LORDS OF SALEM tells the tale of Heidi (Sheri Moon Zombie of HALLOWEEN), a radio station DJ living in Salem, Massachusetts, who receives a strange wooden box containing a record, a "gift from the Lords." Heidi listens and the bizarre sounds within the grooves immediately trigger flashbacks of the townâs violent past. Is Heidi going mad, or are the "Lords of Salem" returning for revenge on the modern-day town? Costarring Ken Foree (DAWN OF THE DEAD) and Bruce Davis (X-MEN). NOTHING LEFT TO FEAR: The first film from music icon Slash (of Guns N' Roses fame) and the latest from the producers of THE EYE and THE RING, NOTHING LEFT TO FEAR is based on the true-life demonic folklore of Stull, Kansas. Wendy (EmmyÂ®-Nominee Anne Heche of TVâs HUNG) and Dan (James Tupper of TVâs REVENGE) move their family from the big city to a sleepy Kansas town and take over preaching duties from retiring Pastor Kingsman (Clancy Brown of TVâs SLEEPY HOLLOW). Unbeknownst to them, their new home is actually one of the seven known gateways to Hell. The familyâs quiet new beginning is savagely derailed by a charismatic but emotionally conflicted man of the cloth. Directed by the protÃ©gÃ© of OscarÂ®-Winner Gore Verbinski, this heart-pounding thriller costars Ethan Gregory Peck (THE SORCERERâS APPRENTICE).

The Lords of Salem
Nothing Left to Fear